The self-appointed liberal censors have struck again in New Zealand.  Emboldened by their success in no-platforming the visiting Canadian rightists Stefan Molyneux and Lauren Southern, and then disrupting a campus debate involving a range of speakers including conservative politician Don Brash, they have turned their attention to… a feminist artist and writer, who put up some posters celebrating the 125th anniversary of the winning of women’s suffrage!

The news outlet Stuff reported on August 19 that “A company has pulled posters commemorating women’s suffrage after pressure from LBTGI youth groups who say the feminist blogger behind the poster campaign holds transgender exclusionary beliefs.” The feminist artist and writer concerned is Renée Gerlich.

The method used against Gerlich in this instance was identical to the one used to prevent Molyneux and Southern from hiring a privately-owned venue. A non-political small business was engaged by Gerlich to put up some posters she had produced. In New Zealand cities, a large proportion of public and private billboard space available for publicity posters is owned or used by this company, called Phantom Billstickers. According to a promotional article in Ponsonby News, the company was founded in 1982 “mainly to give musicians, the arts and creative people in New Zealand a voice.”

When the posters appeared, Phantom Billstickers was inundated with ‘complaints,’ just as was the owner of the Powerstation, the venue booked by Southern and Molyneux. And in each case, the small business, sensitive to the implied or explicit threat of a boycott, caved in to the complaints, and the self-appointed censors won the day.

It is interesting to note that Phantom Billstickers’ managing director Jamey Holloway appeared to recognise that there was something fundamentally wrong with the censorship he was carrying out. He stated that it was not his job to ‘police a fight between marginalised groups’ and that quashing anyone’s right to free speech was something the company was loath to do.

Nonetheless, he acquiesced to the pressure and quashed Renée Gerlich’s right to free speech. So much for giving artists and creative people a voice.

Some of the censored posters are reproduced here. They consist of portraits of leaders of the worldwide fight for women’s suffrage in the late nineteenth and early twentieth centuries, including Emmeline Pankhurst in the United Kingdom, Sojourner Truth, Sarah Grimké and Susan B Anthony in the United States, and Mary Ann Müller in New Zealand, together with handwritten quotes from their speeches and writings. Across the bottom of each poster is a statement from the artist: “Suffragists fought for the female sex. Stop re-writing history.” A related series of posters does a similar thing with contemporary feminists. 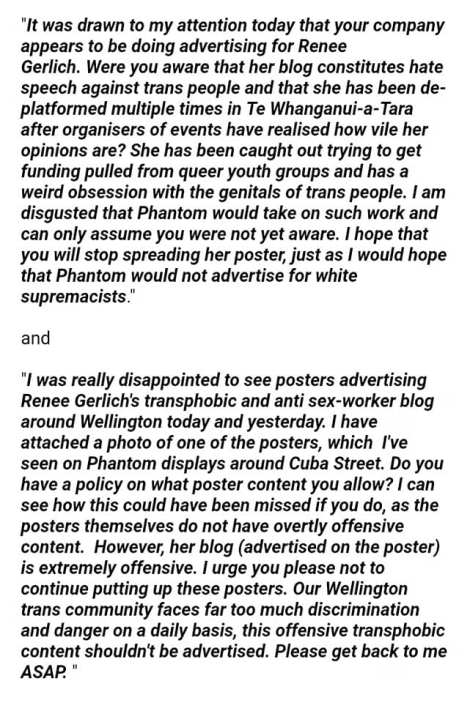 Two of the many emails of complaint received by Phantom Billstickers after they had put up an earlier series of posters by Renée Gerlich.

The Phantom Billstickers’ director also appeared to acknowledge that there was absolutely nothing in the content of these posters that could possibly be considered objectionable, or that could justify the censorship in any way, when he said, “The core issue was not the posters themselves, but Gerlich’s blog.”

It’s worth taking a minute to consider the implications of that statement (which evidently reflects the attitude of the censors.)  Artwork is to be censored, not because of the content of the artwork itself, but because of something the artist has said in another forum, at another time. In other words, it is not just the artwork that is being banned, but the artist herself.

To find a historical precedent for this sweep of censorial powers it is necessary to go back to the personal ‘banning orders’ imposed on individuals in Apartheid-era South Africa, or the Soviet Union in the depths of the Stalinist counter-revolution. Or, perhaps more appropriately given its deeply misogynist character, to the witch-trials of dead centuries. Today’s self-appointed liberal censors, who use the slur TERF against women in much the same way that the accusation of ‘witch’ was used in the past, will be satisfied with nothing less than a confession of witchcraft.

And in fact, Gerlich has been targeted by continuous pile-on campaigns to silence her for the past two years. She was hounded out of her job, banned from the 2016 Wellington Zinefest, and had a petition signed by 120 people calling for her to be barred from access to the media and academic research. Comments threatening violence have been left on her blog, such as “I hope you get hit by a truck, bitch.”

In March this year she was interviewed by Don Franks for the radio programme Franks has run for some years on Wellington Access Radio. The station proclaims on its website that “Wellington Access Radio is the station that’s by, for, and about our community. We’re a non-profit, grassroots organisation that celebrates all things Wellington. We provide a platform of representation for groups not usually heard in mainstream media.”

Censored poster commemorating Women’s Suffrage, by Renée Gerlich. Sojourner Truth was an African-American fighter against slavery and for women’s equality

But not a platform for Renée Gerlich, it seems. When Franks started promoting the upcoming interview, he received a strong warning from the station’s Community Liaison and programme development officer, Esther Taylor. “Renée Gerlich has a history of publishing transphobic and anti-sex worker comments on public forums, and targeting people in these communities,” Taylor said. “Freedom of speech, the ability to express different views, and the facilitation of discussion are fundamental cornerstones of Access Radio. However, we are wary that some of Renée Gerlich’s  views could be seen as an attack on minority groups or as hate speech… We will not broadcast parts of the interview which are deemed transphobic or anti-sex worker.”

Franks says that there has been only one other time in the more than 30 years he has been running the programme that he has received such a warning or caution. That was when he was forbidden from broadcasting The Ballad of Paul Chase, for the station’s fear of legal action by Robert Muldoon, the Prime Minister of the day. Paul Chase was a Maori worker gunned down by the police in his own home in 1983.

In the present case, the ‘warning’ was not enough to deter the seasoned campaigner Don Franks from proceeding with an interview of Gerlich. In most other cases, it is more effective. An interview with Gerlich was recorded by the state broadcaster Radio New Zealand (RNZ), but the interview was never broadcast. Upon inquiring about the reason, Gerlich was told that the recording had ‘simply dropped out of the system.’ A transcript of that interview can be read here.

Scoop describes itself as an independent news website that prides itself on its ‘fiercely independent’ journalists. It is currently transitioning to a new sustainable funding model, the website notes. Scoop has run a number of opinion pieces from Renée Gerlich over the years.

However, earlier this year some of those pieces were dropped by Scoop, with no notification or explanation given. Pressed by Gerlich for an explanation, Scoop editor Alastair Thompson responded that “your approach to the subject matter lacked subtlety. In addition your combative approach to communicating your views, both on Scoop and elsewhere, appeared unlikely to result in the kind of constructive debate.” Given that he had earlier decided to run the pieces, this ‘explanation’ is no explanation at all. The pressure of the liberal censors, and the utter spinelessness of small businesses in the face of it, due to their dependence on their markets and ‘sustainable funding models,’ are once again evident here.

(The articles censored by Scoop can be found here. And just in case any readers are thinking that where there’s smoke there’s fire, and therefore there must be some truth to the accusations of transphobic attitudes, I particularly recommend this one, in which Gerlich criticises the proposals for self-identification of sex on official documents on the grounds that this will obstruct discussion of the specific forms of discrimination and oppression that transgender people face.)

So this is how the 125th anniversary of women’s suffrage in New Zealand comes to be commemorated – with a sustained campaign to silence, isolate and ostracise a feminist artist who seeks to promote and continue the traditions of the great suffragists. It’s a sorry state of affairs. 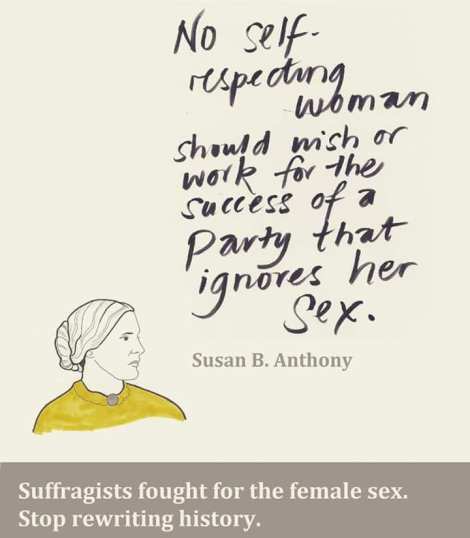 Censored poster commemorating Women’s Suffrage, by Renée Gerlich. Susan B Anthony was another fighter against both slavery and oppression of women in nineteenth-century United States

Understandably enough after these experiences, Gerlich is somewhat cynical about those who claim to defend freedom of speech – especially when she has in mind such intrepid ‘defenders of free speech’ as Scoop’s Alastair Thompson. Her post on the issue argues that since women’s voices have been largely excluded from the discussion, “It is fair to say that … “free speech” is a relatively abstract and far-fetched concept for women.”

This is not an opinion I share. The working class and all the oppressed have a vital stake in fighting for the rights of free speech and assembly, and for artistic freedom, as part of defending the political space we need to organise and discuss in order to advance our interests. There is nothing abstract or far-fetched about the situation when a worker gets fired for violating a gagging order and speaking to the press about conditions on the job, or when a political demonstration gets attacked and dispersed by the cops, or a prisoner is denied the right to reading material, or an artist gets shut down by ‘complaints.’ The liberal censors represent a deadly threat to our right to think and speak for ourselves.

It may be objected that the shut-them-down brigade of ‘self-appointed liberal censors’ I describe here are different sets of people in each of these different cases: The people who made the complaints to the Powerstation, pressuring them to renege on their booking for the Canadian rightists Molyneux and Southern – was this the same crowd that disrupted the Brash debate, and the same ones who joined the chorus of complaints to Phantom Billstickers?

They were probably different individuals, in different cities, but of the same social layer and political tendency. The social layer is the urban professional middle class, the political tendency is the self-described ‘liberal meritocracy,’ which harbours a deep hatred and fear – sometimes concealed, sometimes in plain sight – for the working class.

In any case, I say: Let any among them who feel wronged by this article step forward and publicly dissociate themselves from the campaign to silence Renée Gerlich, and I will recognise their good faith and commend their political courage.

But I don’t expect many takers for this offer.

2 responses to “The liberal censors extend their reach”