It is easy to underestimate the current  ideological and political drive against women, and the degree to which it threatens the gains made in the struggle for women’s equality from the 1970s onward.

Rally outside New Zealand parliament for abortion rights, 1977. There was a mass movement for women’s rights in the 1970s and 1980s.

This may be partly because discussion of the ideas at issue has until recently been largely confined to feminist discussion forums and academic and health advocacy circles, much of it online, and only now is the discussion spilling out into a broader arena and starting to have an impact on public policy.

But a more important reason is that supporters of women’s rights have been blindsided. Having grown accustomed to expecting attacks on women to come from the political right wing,1 some have been caught off guard by the fact that the latest wave of misogynist ideology has come from the left-liberal wing of bourgeois politics. The new drive against women takes the gains of the movements for women’s rights and gay rights as its point of departure, and masquerades as an extension of these gains. Nothing could be further from the truth.

The question of prostitution is a case in point. Until 2003 prostitution was illegal in New Zealand. The crime on the law books was ‘soliciting’ – in other words, the client was the victim and the prostitute was considered the criminal. On top of the sexist violence that was frequently their lot, prostitutes faced the constant threat of police harassment and criminal charges. (There was no legal sanction against the ‘client’.) A pall of stigma and shame hung over the prostitutes, aggravating the already high risks to sexual health: for a woman to be found in possession of a condom could be used as evidence that she was ‘soliciting.’

In the context of a rising mass movement for women’s rights in the 1970s and 1980s, prostitutes in New Zealand began organizing to demand elementary civil rights and protections, and sexual health services. They formed the Prostitutes Collective, which campaigned to bring prostitution out from the shadows and remove the stigma of shame that surrounded the practice. Thanks to this effort, and spurred by fears of the spread of AIDS, eventually prostitution was decriminalised in 2003. 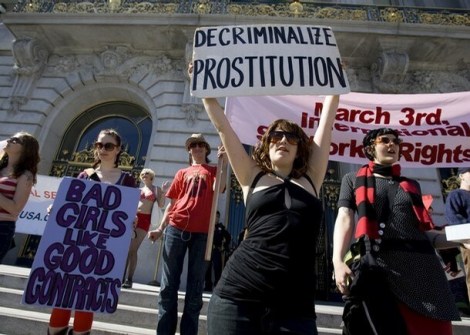 It was undoubtedly a step forward when that legal threat hanging over the prostitutes was removed. Decriminalisation enabled prostitutes to demand legal protection against rape and other forms of sexual assault by their clients on the same basis as any other woman, and made it easier to take public health measures. Legalisation of prostitution followed on the heels of the law changes criminalising rape within marriage, and there were some well-publicised and successfully prosecuted criminal cases where prostitutes accused their clients of rape.

But decriminalisation of prostitution was very much a double-edged sword.  Full decriminalisation also removed penalties for pimping and brothel-keeping, and thus removed barriers to the expansion of the sex trade; its most far-reaching effect was to normalise the practice.

Consequently, the sex trade aggressively expanded out of the back alleys onto the main street and into the suburbs – so fast, in fact, that local authorities had to rush through new bylaws against opening brothels right next door to schools. The sex trade grew in parallel with the explosive growth in the circulation of pornography – and in mutual dependence with it. Both of these social ills were symptoms of sexual alienation and of a breakdown in relationships between men and women in capitalist society. Both of them accelerated and deepened that malaise.

At the same time, a literature grew up which sought to re-cast prostitution as the ‘sex industry,’ and prostitutes as ‘sex workers,’ implying if not explicitly stating that they are like any other worker in a service industry. Mainstream media articles prettifying the sex trade (and helping to recruit for it) are increasingly commonplace.

Take for example this recent article in the Victoria University student newspaper Salient: “Since engaging in sex work I have begun to reclaim my sexuality and ownership of my body. For the first time in my life I fully enjoy sex without feeling self-conscious or guilty. I feel beautiful and strong, and no longer allow myself to be pressured into sex.”

Feminist writer Renee Gerlich traces the source of articles like this to the ‘misleading tripe spun by pimps.’ She has written a critique of such literature here. 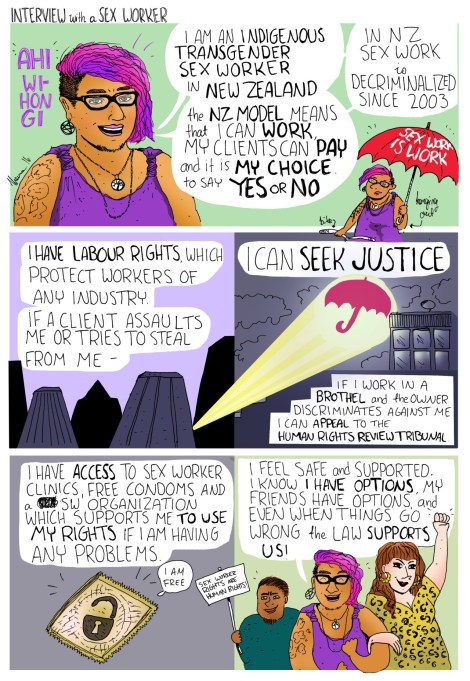 The New Zealand Prostitutes Collective has been at the forefront of the effort to normalise and promote the prostitution ‘industry,’ under the slogan ‘sex work is work’. Its website takes for granted an identity of interests between prostitutes and their exploiters; for instance it states, on its page ‘For brothel operators’:  “If you are considering starting a brothel, or you work with sex workers in your job, NZPC can provide valuable information. We support sex workers to have options in how they work, and brothels to provide safe and sustainable working environments, free from exploitation, coercion, and fines. We can provide you with resources that help your business to stay within the law and provide a safe and sound venue to seek employment.” The Prostitutes Collective describes itself as “a crucial point of liaison between government and non-government civil society, and the sex industry”. It operates Ministry of Health contracts for sexual health services, and functions almost as a government agency.

But ‘sex work’ is not just ‘work like any other,’ even if there are women (and men) who choose to make their living that way, and who need the protection of the law.  The capitalist mode of production turns labour into a commodity to be bought and sold: it requires the wage-labourer to surrender a portion of their labour to the employer, unpaid. Prostitution requires the prostitute to surrender her entire being, her physical and conscious self, including her dignity, to be bought and sold. In this case it is not labour that is commodified, it is the human being herself. The comparison with wage labour is false to the core.

Recognising prostitution as ‘work like any other,’ would mean, for example, that an unemployed woman worker judged to be a suitable applicant for this line of ‘work’ could be required to take up such a ‘job offer’ or forfeit her unemployment benefit.

Prostitution after decriminalisation remains prostitution: a deeply oppressive institution which degrades women to the status of a commodity, a malignant cancerous excrescence on the body of capitalist society. The size of the excrescence is an indication of how far the sickness of capitalism has advanced.

The re-invention of prostitution as some kind of road to sexual liberation for women has not gone unchallenged, of course. Many feminists have decried the normalisation of prostitution and pornography in the strongest terms, and have subjected the associated false ideas to detailed critique. (Feminist Current is one example among many.) However, those who challenge it today can find themselves accused of denigrating sex workers and ignoring the voice of those ‘working in the industry,’ and subjected to intense abuse, no-platforming and censorship of their opinions.

For example, when Renee Gerlich challenged the Salient article on their Facebook page, and posted links to other articles supporting a more critical view of prostitution, her comments were deleted by the magazine’s editors ‘at the request of the author [of the article]’ while a stream of abusive comments against Gerlich was left in the thread. After coming under further criticism for this cowardly act of censorship, the editors pulled the link from their Facebook page and shut down the discussion completely. The new liberal misogynist orthodoxy does not tolerate dissenting opinions.

To be continued. Next post: “Trans women are women” – misogynist ideology and public policy in the guise of transgender rights