The tide of Syrian refugees sweeping into Europe today is like a fresh breeze blowing into a stuffy, crowded room. The breeze makes the curtains flap noisily, dislodges cobwebs from the ceiling, and wakes some of the room’s occupants from their torpor – while sending others rushing to shut the windows.

Nothing captured the meanness of spirit of those trying to slam the windows shut better than this article in the UK Express newspaper on September 10, entitled “Migrant crisis: Are these happy young men really timid souls fleeing war and persecution?”

“They aren’t quite the heartrending image of dishevelled, traumatised refugees fleeing the horrors of their war-torn home country one might expect,” The Express notes, above a picture of some young Syrian men posing for a photo soon after landing on a beach in Greece. The article quotes the right-wing Hungarian President Viktor Orbán saying that the stream of migrants flowing through south-eastern Europe were immigrants, attracted by the prospect of life in Germany, not refugees.

The Express merely expresses in a particularly crass way the objection raised not just by Orbán but by all the imperialist governments: “we might be able to take a few ‘genuine refugees’, but most of these people are not refugees, they are ‘migrants’.” Refugees deserve pity, while migrants deserve razor wire, hatred, and above all, careful regulation to ensure that their movements serve the interests of capital. That is the essence of the argument of every capitalist government in the world.

In order to qualify as a “genuine refugee,” according to the Express, you have to be dishevelled and traumatised, suitably miserable, and above all, you must be a ‘timid soul,’ cowering before the might of the rulers and meekly begging for a little charity from them.

Alvand, 18, from Kobani, Syria takes a selfie with his friends as they walk along a railway track. Photo: Reuters

The Syrian refugees in Europe are certainly not ‘timid souls’ – the Express is right about that, if nothing else.

At a certain point, the swelling numbers of refugees, who had up to that point been atomised individuals and families, each making their own individual journey to freedom, somehow coalesced into a mass movement. On the beaches of Turkey and Greece, on the borders of Macedonia and Serbia, on the highways and railroads of Hungary, Austria and Germany, a social movement developed, taking the fate of the refugees into their own hands collectively, and shifting the politics of Europe in the process. The encampment at the Budapest railway station became a political rally; the ‘walk to the Austrian border,’ a disciplined mass demonstration. 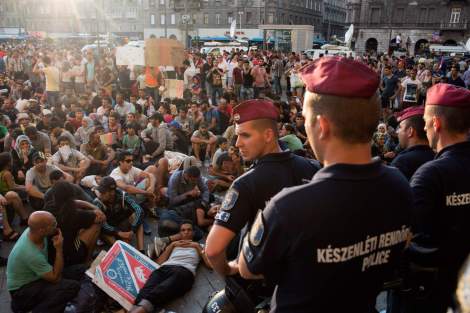 At that point, and not before, the movement of refugees became a political crisis for the imperialist governments. At that point, checkpoints, razor wire and police batons could no longer stop them at the borders. At that point, and not a moment sooner, the imperialist governments began to waver and back down. It was not the photo of a dead child that generated the demonstrations of sympathy and support among the working people of Europe – after all, there have been many other pictures of dead children over the past year – but the determined and increasingly confident movement of fighting proletarians that the Syrian refugees had become.

And having formed themselves into a political movement, their power was magnified. In the past week, every government of Europe, the United States and Australasia was forced to bow before this new power. The swaggering Hungarian fascists were thrown onto the back foot, reduced to kicking and tripping up a few migrants as they surged past – and were widely despised for that. Germany accepted a substantial number, hoping to inject some fresh blood into the sclerotic veins of European capitalism. Even the right-wing government of Australia, which has built its electoral base on stirring up anti-immigrant prejudice, was obliged to back down and announce they would accept some refugees.

(The Israeli government has so far continued its refusal to accept Syrian refugees. But with almost two million living in desperate conditions just across the borders in Lebanon and Jordan (not to mention Israel’s common border with Syria itself) it is only a matter of time before the human tide washes over Israel’s borders, too. An earlier wave of refugees from Africa has already done so. Voices are being raised in Israel, among both Palestinians and Jews, supporting the welcoming of Syrian refugees. Among them are Palestinian Syrians, refugees twice over, whose return would greatly strengthen the struggle for a free Palestine.)

The reactionary anti-working-class political arguments around immigration likewise crumbled to dust. The claim that “the real solution is not to allow the movement of refugees but to end the war in Syria,” often advanced by the very people responsible for causing the violence in Syria, was revealed as just another ploy to derail and disperse the proletarian movement.

Likewise, the false and hypocritical distinction between ‘genuine refugees,’ and ‘economic migrants’ pushed by the Express. For tens of thousands, the humiliating process of trying to convince some United-Nations-appointed bureaucrat that one’s refugee status is genuine, a process usually involving months of demoralising delays, was simply swept aside by the proletarian surge.
This is the way the proletariat was created in every corner of the globe: through brutal acts of violence and force, dispossessing peoples of their homes and means of life, forcing them to migrate to wherever in the world they can sell the only thing they can not be taken from them: their labour power. It is a brutal process, involving much suffering and death.

But out of that process emerges the force that can put an end to such wars and misery – the modern proletariat. This week the fresh breeze blowing through Europe shifted the axis of politics in favour of the proletariat, and many millions of workers, in Europe and beyond, felt the shift, and rejoiced in it.

One response to ““Timid souls” and fighting proletarians: the Syrian refugees force a political shift”