The first brass head has toppled in New Zealand.

On 12 June the Hamilton City Council removed a statue of… Hamilton! British naval Captain John Fane Charles Hamilton, veteran of colonial wars in the Americas, Crimea, and China, commander of HMS Esk, was killed in the Battle of Gate Pā in Tauranga in April 1864. This battle was one of the biggest engagements in the series of wars in the 1860s through which European colonists wrested control of the best farmland in the Waikato, Bay of Plenty, and Taranaki regions from Māori hands, and established the colonial-settler state of New Zealand. The garrison town founded later in 1864 to guard the Waikato conquests was named after Hamilton. It has since grown to become the fourth-largest urban centre in New Zealand. The removal of the statue naturally raises the question of the name of the city itself.

Statue of Captain Hamilton gets hoisted onto a truck     Photo: Stuff

The removal was criticised by Deputy Prime Minister Winston Peters, who said he was “disgusted” at the “wave of wokeism“, and that people proposing to pull down the statues should “grow up”. “Why do some woke New Zealanders feel the need to mimic mindless actions imported from overseas?” Peters said.

One of the by-products of the massive worldwide mobilisations against police brutality and racism in recent weeks, and of the rulers’ desperate attempts to derail and divert this movement, has been the re-igniting of the debate around the many monuments to racist figures of the past. Statues of leaders of the Confederacy, the rebellion of the slaveowners, have been hastily removed in the United States as the rulers scramble to quell the protests. A statue of Jefferson Davis was torn down in Richmond, Virginia. A crowd of ten thousand anti-racist protesters in the UK toppled a statue of notorious slave-owner Edward Colston in the city of Bristol and threw it in the river – an action denounced by Prime Minister Boris Johnson as a criminal act. Bristol was one of the key centres of African slave trade in the eighteenth century.

The question of colonial statues and monuments has also been a long-running issue of contention in New Zealand politics. Objections to the Hamilton statue were first raised by Waikato Māori years ago. Rahui-Pōkeka/Huntly kaumātua Taitimu Maipi, of Waikato Tainui, said it was a stupid decision to install the statue with no consultation in 2013, after it was gifted to Hamilton City. “He was an a**hole, who murdered our people, yet he stood there, depicted as a hero,” Maipi said. “There was no balance, nothing to indicate the other side of the story, of Māori who also fought, and who even cared for wounded British soldiers. In a way if there was [that balance], I think that would have been okay.” 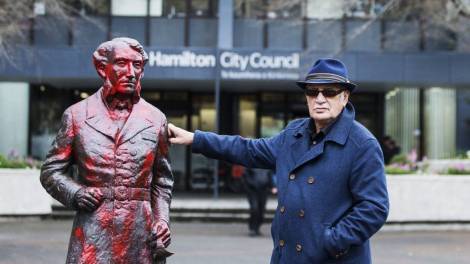 Statues such as these are not primarily artworks, but symbols of who rules. The wish to rid public spaces of hated racist figures and perpetrators of crimes of colonialism is neither ‘mindless’ nor ‘criminal’ – on the contrary, it’s right on target. It is not at all akin to the blowing up of Bamiyan buddhas by the Taliban in Afghanistan in 2001, (as Katherine Rich, a former National Party Member of Parliament claimed in a tweet). The Buddhas had no connection to any ruling group. Their destruction was a crime of religious bigotry and artistic censorship.

These artefacts should not be destroyed. As Waikato man Kip Ormsby told the NZ Herald, the Hamilton statue belongs in a museum “with a plaque outlining his full history, allowing people to make up their own minds about what sort of character he was.” There is a need for such museums of slavery, and of racism. Present and future generations should be given the opportunity to marvel at the fact that such monsters were ever the object of veneration. 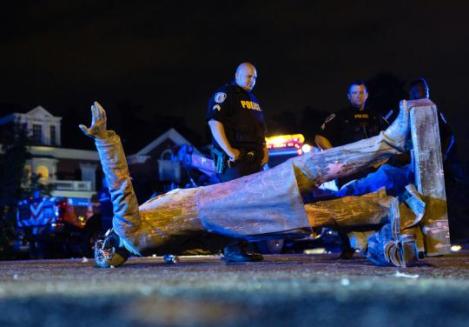 When the hated system of apartheid was overthrown in South Africa in the 1990s, the notorious prison of Robben Island, where Nelson Mandela and many other anti-Apartheid fighters had been incarcerated, was turned into a museum of the anti-apartheid struggle. There will be many more Robben Islands liberated in the coming years – these former torture centres would be fitting places for museums to house the fallen statues.

Certainly, historical context is required to appraise the place of these figures in history. Nothing would be more foolish than to judge historical figures by the standards of today. But it must also be remembered that the act of raising and saluting these statues is not always in the distant past. The statue of Captain John Hamilton was erected in 2013. And on the site of the obelisk memorial to Marmaduke Nixon, another colonial military leader who massacred the inhabitants of the undefended Waikato village of Rangiaowhia in 1864, a First World War memorial was built half a century later, and a plaque attached explicitly stating the continuity between that war and Nixon’s war, the Waikato invasion. At this site, ANZAC Day commemorations are held every year. Once again: these monuments are symbols of who rules today.

Nor does toppling statues equate to “erasing our history” as claimed by National MP Simeon Brown. There is no such thing as a singular ‘our history’ in New Zealand, or any other class-divided society. There is the history of the ruling class – their explorations, their conquests, their leading figures – this is the history which dominates their institutions of learning. And there is the history of the oppressed and exploited, which rides on the shoulders of popular political struggles, but is for the most part drowned out by their history. The construction of these statues is part of what erases history: every statue of a John Hamilton erases the history of the victims of their massacres, land grabs, and tortures. On the other hand, the toppling of these hated figures opens long-suppressed, and absolutely necessary, discussions on our history, the history of the oppressed and exploited.

Battle of Gate Pa was one of the greatest defeats inflicted on colonial troops. Statues like that of Captain Hamilton are part of the erasure of our history – their removal opens a discussion.   Graphic: Samuel Calvert, from a sketch by G Lewis,  Trove

Alongside of this broadening discussion, there is a push in the opposite direction. The resistance to the removal of the statues is only one of the forms it takes. A more insidious form is the sanitising of cultural artefacts of the past. In this case, the erasure of history is what is involved – a whitewashing of the cultural history of books and movies which depict racist stereotypes. The HBO network pulled the movie Gone With the Wind on account of the racist stereotypes it portrays. “These racist depictions were wrong then and are wrong today, and we felt that to keep this title up without an explanation and a denouncement of those depictions would be irresponsible,” an HBO spokesperson said, adding that the film would return “with a discussion of its historical context and a denouncement of those very depictions.”

Now the Netflix and BBC have got in on the act, pulling from their streaming platforms episodes of 1970s sitcom Fawlty Towers and early-2000s comedy Little Britain, which featured – and mocked – characters who used overtly racist language. Like HBO, the BBC assured its audience that “we will reinstate Fawlty Towers once … extra guidance has been added.” Netflix has also pulled shows by Australian comedian Chris Lilley, who uses blackface.

The depictions of happy slaves, loyal to their masters, in books and movies such as Gone With The Wind, is indeed highly objectionable. Such cultural stereotypes are without a doubt part of the ideological justification and rationalisation of slavery and racial inequality, and it is inevitable that as the current worldwide anti-racism protests continue to grow, these cultural artefacts will be rejected with disdain by ever greater numbers. The market for such material is rapidly shrinking, and will continue to shrink, and that is cause for celebration.

But far from responding to demands raised by the anti-racist protesters, these media corporations are attempting to deflect criticism from themselves as the purveyors of such material, and from the class to whom belongs this culture. And in the process, they seek to pre-empt and shut down the necessary discussion on their history and ours which is just beginning.

The last thing the working class needs is ‘extra guidance’ from the BBC about what is acceptable, and who is responsible.  There is no right not to be offended. We need not to be shielded from this material by their paternalistic hand, but to see it for ourselves, understand its source and its purpose, confront it, and reject it.

One response to “Toppling statues, censorship, and erasing history”