She advocates instead the so-called Nordic model, under which penalties against prostituted women are removed (and therefore the added burdens of police harassment and blackmail which exacerbate the oppressive nature of prostitution) but purchasing and profiting from the sale of women become (or remain) illegal. 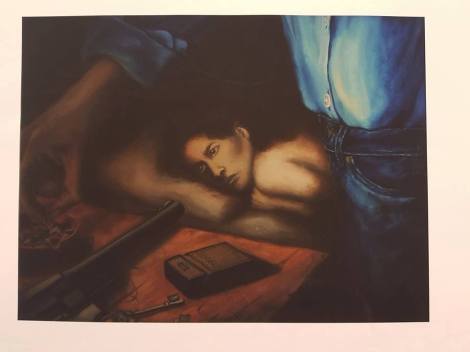 Painting by Suzzan Blac from the exhibition Too Much Truth: Women’s Global Resistance to Sexploitation

Renée is also critical of gender identity politics – and holding critical positions on prostitution and gender has brought Renée into sharp conflict with the New Zealand Prostitutes’ Collective (NZPC), an organisation originally set up to fight for protections for prostituted persons, but which functions today as the voice of the ‘sex industry.’ NZPC spokesperson Ahi Wi-Hongi (who identifies as transgender) has spearheaded a campaign of harassment against her since June 2016, centred on a petition accusing her of  “promotion of anti-transgender hate speech.”  The Wi-Hongi petition reads, “We call on you to stand up for human rights. We ask that you do not facilitate Renée’s access to transgender people, nor give her a platform to spread her anti-transgender hate speech. We ask that you do not allow Renée Gerlich to speak at your events, that you revoke any ethics approvals for study or research, that you do not give financial assistance to her campaign of hate.” It was signed by upwards of 120 people.

The signed petition was then circulated further, to ramp up the pressure on Renée’s friends and associates and maximise her social and political isolation. The manager at her work was peer pressured, which eventually resulted in Renée’s resignation for workplace bullying. About the same time, Renée found herself barred from the Wellington Zinefest, a community hand-made book market, on the grounds that her criticisms of prostitution and gender identity politics made her ‘unsafe.’ 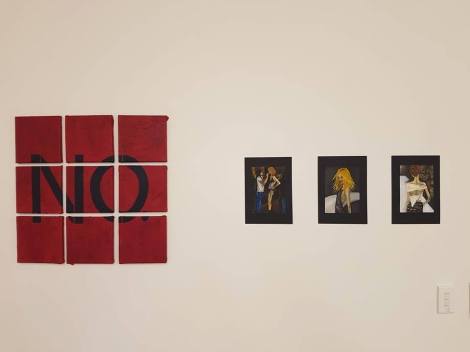 Artwork by Cherry Smiley (left) and Chelsea Geddes  from the exhibition Too Much Truth: Women’s Global Resistance to Sexploitation

This no-platforming campaign is aimed not at some representative of a powerful institution, but at the persecution and silencing of a single individual, whose only ‘media platform’ consists of her blog. Nor was there, for all the wild accusations of ‘hate speech,’ any evidence presented of Renée’s alleged prejudice against transgender people. In the absence of evidence, there was only preposterous and inflammatory non-sequiturs like this one: “Renée says she is ‘critical of transgenderism’, which is to say that she thinks the existence of transgender people should be up for debate, because she thinks possibly transgender people shouldn’t be allowed to exist. That is what leads to burning transgender people in the streets.”

This kind of vindictive bullying campaign against a single individual, led by an organisation that is not an organ of the capitalist state (albeit one with substantial government funding and semi-official status) is fairly uncommon at present. But similar vendettas have been launched against feminists opposed to transgender identity politics in other countries. The nearest historical precedent that I can think of – all proportions guarded – is the campaigns of persecution and assassination directed against the small forces of the Trotskyist Left Opposition by the mass Stalinist parties in many countries, in the period when Stalinists dominated the left.

Indirectly, this campaign reflects the fact that in a period of deepening social crisis such as we are entering, ideas matter more than they do in times of social stability. It is vitally important for the working class and all the oppressed to keep open the political space needed to discuss and debate ideas – including false ideas – in order to sift and separate truth from falsehood. By the same token, the ruling class has less room than before to tolerate ideas and discussion outside their own narrow framework; the rulers seek to shut down political space where they can.

Poster for the exhibition Too Much Truth: Women’s Global Resistance to Sexpolitation

Renée chose to fight back. She continued to write her blog, frequently criticising press articles that sanitised and promoted the sex trade. In September, she organised a public art exhibition in Wellington entitled Too Much Truth: Women’s Global Resistance to Sexploitation. It was a collection of art works, posters and other documents related to the struggle to abolish prostitution, the international trafficking of sex slaves, and the sexual exploitation of children. The exhibition was held in the Thistle Hall, an exhibition venue administered by the Wellington City Council.

As soon as the publicity for the exhibition began to circulate, the campaign to shut it down sprang into action. Wi-Hongi distributed a series of posters in support of the sex industry and full decriminalisation, with the note, “I wonder if any shitty anti-sex worker art exhibitions will get postered? I think opening is in 3 days, right? It’s a good chance to put up some relevant resistance.”

Wi-Hongi added, “Disappointed that Thistle Hall is hosting this… Maybe drop them a polite message and let them know what you think?”   The self-appointed censors instinctively lean on employers, landlords, venue owners, and the state to further their campaign of intimidation. They correctly sense that nothing can isolate and defeat an individual more effectively than the social power of capital.

Renée protested serious threats and censorship where possible, taking Zinefest to task before the Human Rights Commission for discrimination on political grounds, and reporting the online bullying and harassment to the government-supported online safety organisation Netsafe. In one case, where a student bragged that he had discovered where her parents lived, and talked about mailing a package of human faeces to their address, she succeeded in having him reprimanded by the university authorities and extracted a promise from him not to proceed with his threat.

She also organised security for the exhibition, with a security camera that signs at the venue alerted visitors to. Two friends, Georgina Blackmore and Pala Molisa, looked after the space for the week with Renée, who had been concerned about the possibility of intimidation or even assault. The exhibition, as an international survey, also represented artists and organisations from around the world – so it had global support. 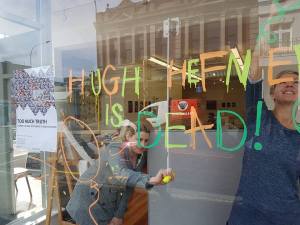 Exhibition window after the announcement of Hugh Hefner’s death

In the end, this combination of support and defence measures made it politically impossible for the “relevant resistance” Wi-Hongi tried to incite to be carried out. The exhibition went ahead without disruption, and became a forum for useful discussions on the problem of the sex trade over the course of a week. It happened to coincide with the death of Hugh Hefner, founder of Playboy magazine, and visitors to the exhibition engaged in discussions on the anti-woman legacy of that publication. Only one individual had to be ejected during the entire week. Far more were moved to tears, gratitude and conversation.

In the circumstances, this was a significant political victory. It pushed back the apologists for the sex trade and marked a defeat for all those who tried to silence feminist opposition to it. By Renée’s account, the artwork in the show – by K P M Artivist, Suzzan Blac and Chelsea Geddes in particular – had a transformative impact on viewers. The exhibition provides a great example of how bullying and intimidation can be defeated, and of how the political space workers need to think and debate ideas can be defended.

The deepening capitalist social crisis is bearing down hard on the petty-bourgeoisie, causing some liberals and sections of the petty-bourgeois left to turn in an extreme anti-working class direction. No-platforming and shouting down people with opposing political opinions, the censoring and race-baiting of artists, and other forms of thuggery and bullying; these tactics are currently enjoying a certain popularity, especially on university campuses, as means of settling political arguments.  (See here for a ‘left’ defence of no-platforming in general, and of feminists in particular). This in turn is providing new openings for state authorities to intervene more actively against workers’ rights.

On the other hand, there remains in the working class a vast reservoir of support for freedom of expression and the right to discuss and debate ideas. It is by orienting to and basing itself on this support, and only on this, that successful defence against bullying and intimidation can be organised. As the success of this exhibition has demonstrated, political space is still wide open, provided you know how to use it.