Jewish communities have existed in China for at least a thousand years, since they arrived as traders along the silk road. The European explorer Marco Polo, visiting Beijing in the 13th century, noted the prevalence of Jewish traders there. 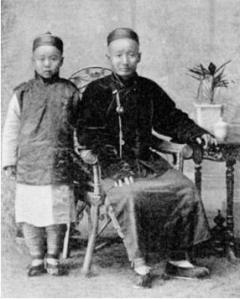 A synagogue in Kaifeng (of which, unfortunately, only a tiny trace remains in the form of a covered well) served that community of traders. Although there was much intermarriage and assimilation, the Kaifeng Jewish community retained its separate identity until the end of the nineteenth century, when it suffered severe persecution and dispersal at the hands of the Taiping rebels. (Pearl S Buck published a carefully-researched novel about the Kaifeng Jewish community in 1948 called Peony).

Jews also arrived in China under British protection, after the opium wars of the nineteenth century, mostly Sephardic Jews from India and Iraq. A sizable community developed in Shanghai, involved with trading in opium and cotton. Ashkenazi Jews also arrived in China from Russia, fleeing anti-Semitic pogroms in the late nineteenth and early twentieth centuries. Another wave arrived among the counter-revolutionary White exiles fleeing the Russian revolution of 1917, settling especially in Harbin. When the White Russian rightists of Harbin launched anti-Semitic pogroms in that city, many of these Jews fled further south to Shanghai.

Thus there was already a Jewish community in Shanghai when Hitler came to power in Germany in 1933 and Jews began to flee central Europe. Shanghai was remote geographically and culturally, and not the preferred destination of these European refugees, however they had few options. In order to leave, they had to get a visa issued by their country of destination, and the United States, Britain and many other possible destinations had slammed the door to all but a handful. At the Evian conference convened to discuss the problem of Jewish refugees in July 1938, 31 of the 32 countries represented declined to increase their quota of refugees. The Australian delegate remarked, “as we have no real racial problem, we are not desirous of importing one.” After the widespread anti-Semitic terror of Kristallnacht in November 1938, the tide of those seeking to leave rose to a flood. 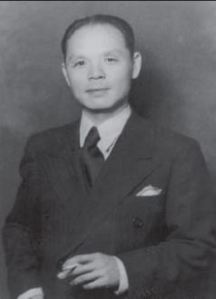 In the early 1930s Shanghai was under the control of the Kuomintang regime of Chiang Kai-Shek. China itself was in peril. Japan was occupying the northern region, and in mid-1937 the Japanese invasion spread to the whole of China. Almost simultaneously with this, a Kuomintang diplomat stationed in Vienna, the Consul-General Ho Feng-Shan, began to issue visas to Jews to travel to Shanghai, against the orders of his superior, the Chinese ambassador in Berlin. Thousands of Austrian Jews managed to make it across the border to Italy using these visas, from where they bought a passage by sea to Shanghai.

The Japanese consul in Kaunas, Lithuania, Chiune Sugihara, did likewise, also contrary to his official instructions, and several thousand Jews crossed the Soviet Union to Vladivostok, taking a ferry from there to Kobe, Japan. Many of these eventually ended up in Shanghai also. The exact numbers are not recorded, but it is believed that by the early 1940s between 14,000 and 23,000 Jews who had fled the holocaust were living in Shanghai.

The Jewish community in Shanghai did their best to accommodate the flood of new arrivals, at first with the help of aid from Jewish organisations in the US. But soon this aid was cut off by the widening of the war.

In the middle of 1937 Japan launched its bid to take control of the whole of China. The battle for Shanghai was one of the earliest and biggest battles in this war, a massive assault by air, sea, and armoured land forces. House-to-house fighting raged across the city. At its height, the fighting in Shanghai involved almost a million troops, a desperate rear-guard action by the Chinese army, buying time while they evacuated and relocated key industries from Shanghai to the interior.  Shanghai fell to the Japanese after three months, and became their base of operations against the Republican capital of Nanjing a few months later.

Ohel Moshe Synagogue in Hongkou, Shanghai, one of two built by Shanghai’s Jewish community in 1920s

Shanghai remained under Japanese occupation and control for the next eight years, during which time the majority of the Jewish refugees arrived.  Ho Feng-Shan continued to issue visas to the war-torn city until he was removed from his post in May 1940. The new arrivals faced ever more difficult conditions, especially after the Japanese attack on Pearl Harbour brought the United States into the war and cut off the flow of aid from American Jewish organisations.

Throughout these years the Nazi ‘final solution’ continued to develop ever more monstrous forms. Nazi policy began to pursue the refugees into exile. The German government began to put pressure on its Japanese ally to return the Jews of Kobe and Shanghai back to Europe or exterminate them. Gestapo Obersturmbannführer Josef Meisinger visited Tokyo and Shanghai with suggestions on how the Japanese might carry out the slaughter: by starvation or by putting them on ships which could then be sunk.

Imperial Japan was not unaffected by the anti-Semitism that had erupted in Europe. Anti-Semitic tracts circulated widely among the Japanese high command. (Many of these pamphlets were produced by the Jew-hating white Russians of Harbin with whom they had come in contact when Japan invaded and occupied northern China.) However, these ideas manifested themselves in different ways. The Japanese government toyed with a plan to settle Jews in their puppet state of Manchukuo, apparently based on accepting the idea in the anti-Semitic “Protocols of the Elders of Zion” that Jews had unlimited capital at their disposal.

Japan did regard the community of ‘stateless persons’ in Shanghai as a liability, and it began to take steps to appease its German ally. The Jews of Shanghai were confined to a clearly defined ghetto and placed under curfew for ease of control in 1943. The refugees in Kobe were then relocated to join this ghetto. It was an area of less than a square mile in the Hongkou district where the main synagogue stood (and still stands today, a museum of the Shanghai Jews). The Chinese residents did not leave, so the ghetto was not isolated from the rest of the population. Nevertheless, conditions were dire, and hunger was widespread. 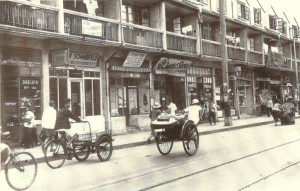 At one point, the Japanese military governor of Shanghai, trying to work out how to respond to the pressure from Germany,  called the rabbi of Shanghai to a meeting. Journalist Warren Kozak has written about this meeting:

“The Japanese governor was curious: “Why do the Germans hate you so much?”

“Without hesitation and knowing the fate of his community hung on his answer, [the rabbi] Reb Kalish told the translator (in Yiddish): “Zugim weil mir senen orientalim — Tell him the Germans hate us because we are Oriental.” The governor, whose face had been stern throughout the confrontation, broke into a slight smile. In spite of the military alliance, he did not accede to the German demand and the Shanghai Jews were never handed over.”

By this time, Japanese expansion into China and the wider Asia-Pacific region had been thrown into reverse, pushed back by the resistance of the Chinese and Korean peoples, and also by the entry of the United States into the conflict. The liberation of Shanghai from Japanese rule began in the form of US bombing raids in 1944, targeting factories and working class residential districts. Since the city is at a river mouth and the water table is near the surface, it was not possible to build underground bomb shelters. 38 Jewish refugees and hundreds of Chinese were killed in the first raid alone.

Shanghai was officially liberated from Japanese rule in September 1945. The big majority of Jews left their place of refuge within a few years to re-settle in the United States, Australasia, or Palestine. Some Jewish communists returned to Europe, including Germany. By the early 1950s only a few hundred remained.

But a few became partisans in the civil war in China, including Jakob Rosenfeld, a medical doctor who served as a field doctor for the northeast People’s Liberation Army from 1941, participating in the PLA’s march on Beijing. He served as Minister of Health in the 1947 Provisional government of Mao Zedong.

One response to “Shanghai and the holocaust”