I have never been very keen on Maoist poster art – not even in the period of my life when I was attracted to Maoism – and I probably would not have bothered with the museum of poster art in Shanghai had not a friend recommended it. I was glad I saw it.

The place is more a shop than a museum – and apparently there is a ready market for the old Maoist posters from the 1950s, 60s and 70s. Original woodcut posters from those times of the Stalinist pantheon were priced up to a couple of thousand US dollars, although most of the trade is for much cheaper reproductions. As far as I could tell from eavesdropping on conversations in the shop, the buyers were mostly old European lefties of my generation, nostalgic for the days when the government of the world’s most populous nation talked – talked, at least! – about international workers’ solidarity and fighting imperialism, along with a younger layer who seemed to regard the great Chinese revolution as a quaint curiosity from the distant past. 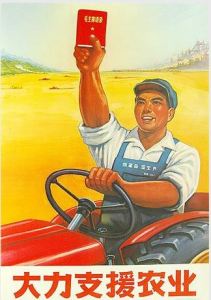 So, out the door were flying posters of pink-cheeked peasants bringing in a harvest of golden grains, as well as others proclaiming solidarity with the Arab struggle against British and French colonialism in Suez, solidarity with the anti-racist struggle in the United States, the 1968 workers revolt in France, and the Vietnamese liberation struggle.

Urging support for US protests against Vietnam War

With few exceptions, these posters were artistically crude and politically vacuous: the politics of ultraleft sloganeering. That phase of Chinese history certainly seems very distant today.

The exceptions, from the post-1949 period, were a small number of posters from the early 1950s which documented some of the real conquests of the early years of the Chinese revolution: two in support of the land reform, depicting the public bonfires on which the oppressive ‘loan agreements’ with the landlords were incinerated, and some in solidarity with the people of Korea when they were under attack, with the slogan “By standing in solidarity with Korea, we also save our revolution.”  There was nothing empty about that slogan: the workers and farmers of China, together with Korea, dealt US imperialism its first-ever defeat. A few posters from this period showed the influence of Russian Constructivist styles.

But far more interesting in general were the posters from the pre-revolutionary period.

Shanghai in the 1920s and 30s had a large publishing industry. Newspapers, magazines, cartoons were published in great numbers, in various languages, at a high technical level. The “Shanghai Lady” posters from the 1920s were almost exclusively commercial advertisements for cigarettes, soap, medicines and the like. But such was the care that went into their artistic creation and production, sometimes it is difficult to see what is being advertised. These were full-colour productions of a high standard.  They were extremely popular at the time, and have remained popular and influential ever since. 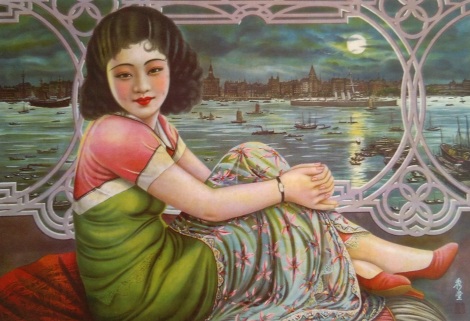 The interest in these posters is both their artistic style and what they reveal about social conditions in bourgeois Shanghai in the 1920s. 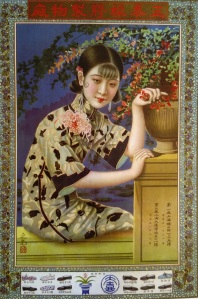 These are images of the elite courtesans of 1920s Shanghai, proudly Shanghainese (several have scenes of Shanghai in the background), and they give a tiny but fascinating glimpse into the social status and sexual mores of bourgeois women in the European-dominated city. One poster even depicted a couple of women dancing the tango together… 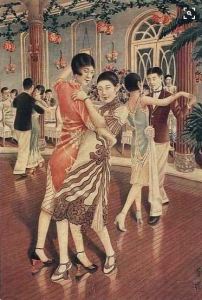 And like the contemporary European advertising posters on which they were modelled, they are essentially sentimental.

The scene is altogether darker in the 1930s, the period following the dreadful massacre of Shanghai workers by Chiang Kai-shek’s forces. The confident optimism of the Shanghai Lady posters seems inappropriate to those times. But the spark of ideas was not entirely extinguished by the dreadful defeat of 1925-27. On the contrary.

It was during this time that the publication ‘Modern Sketch’ appeared. The posters in Modern Sketch are eclectic in style and subject matter. Among them are some outstanding pieces of graphic design, and some interesting political satire.

There is a clear influence of currents of European modern art, from the French poster art of Daumier and Toulouse-Lautrec to the graphic art of German Expressionism, alongside the more stylised art deco conventions. 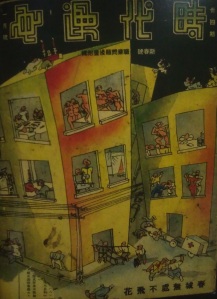 The specific meaning of many of the posters one can only guess at after all these years. However some general themes are obvious. This was an age of growing militarism, of the humiliation of China at the hands of various imperialist cliques, and of unprecedented growth of gangsterism, prostitution and corruption in Shanghai itself. These themes – or rather protests against all of this – appear in the Modern Sketch posters.

They represent the high point of Shanghai’s graphic art, daring and original artistically and sexually, unsentimental and unsparing in their satire.

Japanese militarism descended over the whole of China from late 1937, and  the publication of this kind of material came to an abrupt end. It was not revived until after both Japan and the Kuomintang regime had been defeated.

Only when the Mao Zedong government, coming out of the 1949 revolution, needed to mobilise mass support for its political campaigns did poster art return in the early 1950s, and the colour presses of Shanghai started rolling again. And when they did, it was the artistic styles of the Shanghai Lady posters that reappeared, rather than the more daring art of the 1930s.

It is not hard to see the direct continuity of style between the Shanghai Lady pilot of the 1930s and the 1960s poster celebrating electrification.

The pride in the changing role of women is the same. The sentimentality is the same. The only new elements are the fixed smiles and an exaggerated heroism in the poses of the human figures, typical of contemporary Stalinist iconography in the Soviet Union. This is not an improvement. Those smiles and poses remained ever more firmly fixed in place throughout the catastrophic and tragic events of the 1950s and 1960s, severing all relation between this art and the real world.

The fundamental dishonesty of those images, as inexcusable in propaganda posters as in any other form of art, was a factor in convincing me many years ago to give that political current a wide berth. Nothing I saw in this museum led me to reconsider that decision.