A friend who is a supporter of the Palestinian struggle for self-determination, and also of the Boycott, Divestment and Sanctions campaign against Israel, wrote to me yesterday, objecting to an editorial he had read in the Militant newspaper. The editorial was entitled End attacks on Jews, brutal Israeli response, and it concluded by stating the need for a working class leadership in Israel and Palestine. It said, in the part quoted by my friend, “Such a leadership can be constructed in the fight to recognize the state of Israel, demand a contiguous, economically viable Palestinian state, and advance immediate demands to give the toilers space to live and organize. These include: End the “collective punishment” and destruction of the homes of Palestinian families by the Israeli regime! Guarantee the right of Palestinian toilers to land, water, and the ability to travel to work! Halt the construction of Israeli settlements in the West Bank! Oppose Jew-hatred in any form! ”  (The article can be read in full here.)

My friend remarked about this article: “This is simply a variant of left Zionism.”  My response to him is reproduced below, in a slightly expanded form.

No, it’s a road out of the impasse, a way out of the self-defeating Arabs-against-Jews political blind alley into which the Palestinian struggle has been led by Hamas and the Palestinian Authority, a blind alley in which supporters of the Boycott-Divestment-Sanctions campaign also find themselves. It is not a comprehensive programme for the liberation of Palestine and makes no claim to be such, but rather, as it says, a set of immediate demands to give the toilers space to live and organise, and find their common interests. 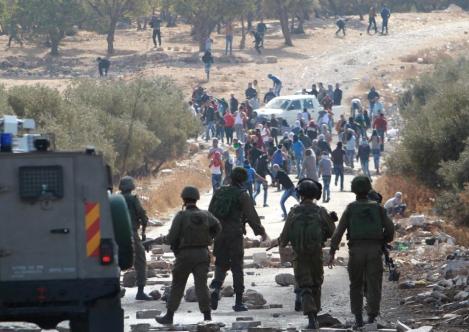 Recognition of the state of Israel is not the same as support to the state of Israel, and therefore has nothing to do with Zionism by any definition of the term. I support recognising Israel in the same way as I support recognising the French, New Zealand or Turkish states. It implies no support for these states or the governments that rule them, only recognition of the simple fact that, for the time being, they exist. This kind of recognition ought to be straightforward enough, a simple matter of facing the facts of the relationship of class forces today.

Under what circumstances would I refuse to recognise a state or government? Firstly, when that government’s claim to be the legitimate government is false.  For example, for several decades after the victory of the Chinese revolution in 1949, the defeated Kuomintang regime of Chiang Kai-Shek continued to claim that it ruled all of China, even after it had fled to Taiwan and controlled no territory outside of Taiwan. In spite of that, it was recognised  in the United Nations as the true government of China until 1971. The remnant Khmer Rouge forces of Pol Pot, defeated by a Vietnamese-supported uprising in 1979, also claimed to be the legitimate government of Cambodia for another twenty years, likewise receiving UN recognition. All UN development aid intended for Cambodia was thus diverted to their wretched military barracks. These were clearly fraudulent claims; imaginary states and governments.

To take a slightly different example, I oppose recognising US sovereignty over the enclave it occupies at Guantánamo Bay in Cuba. Their control of the enclave is real enough, but Guantánamo Bay is clearly part of the sovereign territory of Cuba, not separate from it and not part of the US, and the US occupation of it violates the clearly-expressed will of the entire Cuban people. One further example: I expect that before many years have passed I will recognise a Kurdish state. But it would be premature and wrong to recognise such a state at present, no matter how much I wish it would come into existence, because as yet it doesn’t exist.

Aside from situations like that, in which wars and revolutions lead to a real dispute over who actually rules a territory, I can’t think of any reason why you would not recognise the existing state. There once was such a dispute over who actually ruled Israel for some years after 1947, but that state of affairs ended in 1967 if not earlier (whether we like the way it ended or not.)

Why does it matter? Why is it a fight to recognise the state of Israel? Because various bourgeois political currents in the Middle East continue to act as if the Israeli state is a figment of the imperialist imagination, like the non-existent states ruled by Chiang or Pol Pot. More importantly, a false political strategy rests on this non-recognition. The capitalist states that I recognise are not transitory or imaginary entities. They will have to be overthrown from within by the working class in those states, and can not simply be pushed aside by a military action from without, still less by an act of will. The fight to overthrow the Israeli state is closely intertwined with the Palestinian national struggle, but it can not be reduced to that struggle. The refusal to recognise Israel is first and foremost a rejection of any possibility of common struggle between Palestinians and Israeli Jews. That is why it matters and why it is wrong.

Here are a few of the negative consequences of this false strategy built on non-recognition of Israel:

1. The open encouragement of Palestinian youth to engage in utterly self-defeating acts of individual terrorism directed indiscriminately against Israeli civilians – acts whose only consequences could be ever-more-violent repression by Israeli forces and ever-greater support for such repression among Israeli Jews. This is absolutely suicidal for the Palestinian struggle. The blows of repression fall hardest upon the most courageous young Palestinian fighters. In the recent round, Hamas even drags the honourable history of the intifada into the mud, by equating that act of mass resistance with today’s individual acts of terror. 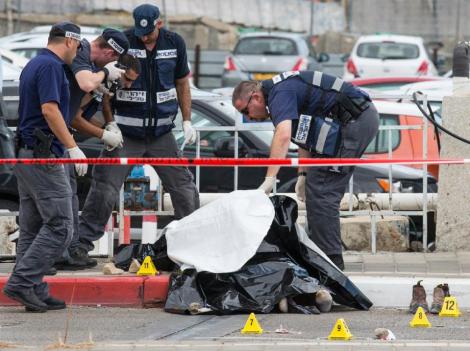 Israeli security forces inspect the body of a Palestinian man who was shot dead after stabbing an Israeli soldier and three others in Tel Aviv on October 8, 2015 (AFP Photo/Jack Guez)

2. In further consequence, the labour unions and other organisations that exist in Israel embracing both Jewish and Palestinian workers come under severe pressure and tend to disintegrate along national-religious lines. 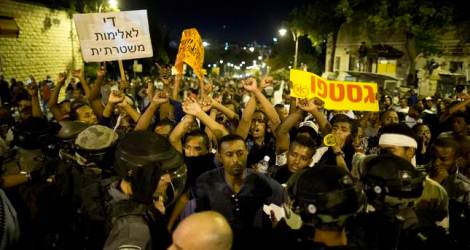 Ethiopian Israelis protest in front of border police officers during a demonstration against racism and excessive aggression by Israeli police in Jerusalem on April 30, 2015 (EPA Photo)

3. Important class schisms that open up within the Jewish population get totally overlooked – such as the recent fights around police violence against Ethiopian Jews, or the protests against anti-gay terror attacks on a gay pride march.  These are of no interest to Hamas, nor to others who follow the Hamas line that the Jews are 99% or 100% reactionary. To Hamas, such developments are an embarrassment, not an opening.

4. When, in response to the Syrian refugee crisis, the Palestinian Authority (which does recognise Israel, in order to abjectly surrender to it) initiated a political campaign to accept Syrian-Palestinian refugees for settlement in the West Bank, where were the BDS campaigners? I don’t follow BDS statements closely, so tell me if I’m wrong, but all I heard was a deafening silence. All the righteous noise Hamas and their supporters make about the Palestinians’ right of return suddenly goes silent the moment the opportunity arises to actually join a fight for it. 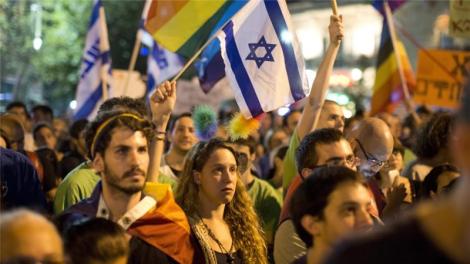 In Jerusalem, hundreds protested both against the West Bank arson attack that killed a Palestinian child and stabbings at a Gay Pride march, August 2015 [EPA] Al-Jazeera

5. This deafening silence surrounds the fate of Palestinians in Syria in general. More Palestinians have been killed in Syria since 2011 than in the Israeli assault on Gaza last year (about 3,000, compared to about 2,300 in Gaza). Yet… hardly a peep out of any group supporting the BDS campaign about this. (On the other hand, the Militant, which you wrongly describe as “left-Zionist,” has written about it here and elsewhere.) Are these 3,000 not also displaced Palestinians? Are their deaths of no importance to the Palestinian struggle? The answer is: of course they are Palestinian, but their fate is another embarrassment to Hamas. Hamas long-standing ties to the Assad regime which is responsible for most of these deaths. Although these ties have frayed recently, Hamas is very anxious to re-establish them, and are not going to let a few thousand Palestinian deaths stand in the way of their diplomatic manoeuvring. Once again, tell me if I am wrong. Show me the articles by supporters of the BDS expressing solidarity with the Palestinian fighters in Syria.

This list of missed opportunities and mounting dangers is getting longer month by month.

The Palestinian national struggle is on the back foot today, in spite of the continuing courage and tenacity of the Palestinian youth. It gives me no pleasure to say that, but it is another fact which must be faced. Think about it: there must be a reason why the Israeli cops and military, and the Israeli rightist thugs, are increasingly bold today. Nothing could be more irresponsible and dangerous than the Hamas bragging about a new intifada, or the leftist cheerleading for the Hamas campaign, such as I have seen in the past few weeks. Revolutionary politics begins with facts, including unpleasant ones.

22 responses to “Letter to a friend: on recognising the Israeli state, and separating from the treacherous leadership of Hamas”