Notes from a visit to West Africa in January 2015. Fourth article in a series.

In the savannah regions of northern Ghana, Togo, and Benin, and southern Burkina Faso, most of the rural toilers we saw were engaged in small-scale, semi-subsistence cultivation of cereal crops. It was already well into the dry season in this region when we visited, and so the main food crop of sorghum – which grows on tall plants similar to maize, but with the seed heads at the tip of the plant – had already been harvested.

Across the savannah, piles of sorghum grain were drying on roofs and racks in the villages,  and only dry stubble was left in the fields. 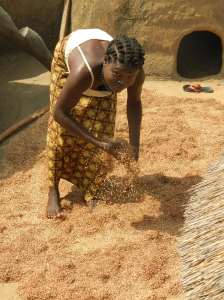 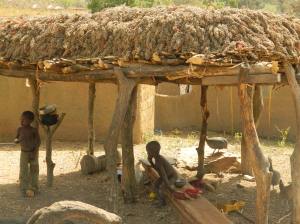 Millet was the next most common crop, and had also mostly been harvested, and was being threshed (by hand) and dried. 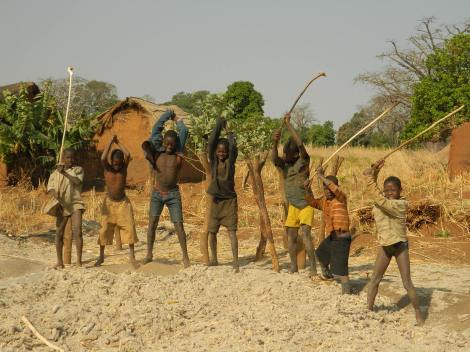 In some regions there was some larger-scale commercial farming, with wage-workers in the fields. Around Banfora in the warmer, wetter southwest of Burkina Faso near the border with Mali and Côte d’Ivoire, there is industrial-scale agriculture: thousands of hectares of sugar cane, irrigated by mobile overhead irrigation lines  up to a kilometre long, just as you see in New Zealand on the dry lands converted to dairying, and with operations such as harvesting largely mechanised. (There is a refinery just out of Banfora where the cane is processed; some is also made into alcohol on a neighbouring site – these factories between them employ hundreds of workers. 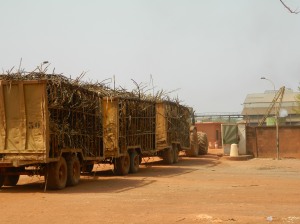 The big cash crop in Benin, Burkina, and Mali is cotton, and production has grown significantly in recent years. 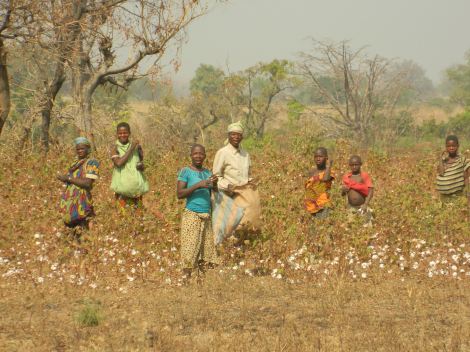 We travelled to Sindou, a small village in the far southwest of Burkina, on a cotton truck. I wanted to climb on the back of the truck – I thought a ten-ton mattress of cotton wool would make for a nice comfortable ride, but unfortunately the truck was empty, heading southwest to pick up its load, and we had to ride in the cab, on a slab of foam rubber. Cotton is a big part of the traffic along these roads, including a substantial part of the crop  from landlocked Mali on its way to the coastal ports. We passed several other cotton trucks piled high, and there were places along the road where bolls of cotton fallen from the back of other trucks gathered in little piles like snowdrifts on the roadside. The cotton is partly processed in Chinese-built plants in Bobo Dioulasso.

While the development of industrial agriculture and its associated processing industries has swelled the ranks of the proletariat, the most significant growth of the working class in Burkina has taken place through the expansion of mining, especially gold mining.

Burkina Faso is now one of the largest producers of gold in Africa, and gold has become the country’s top export commodity. There are big underground gold mines employing hundreds of workers in various places in Burkina, many built with investment from Canadian mining companies. (Large new industrial gold mines have also recently opened in Mali and Ghana).

Visiting these mines was out of the question, though we did try. Ownership of the mines is a sensitive question right now, because at least some of them were partly owned by the family of ex-president Blaise Compaoré, who was overthrown by a popular revolt last October. With Compaoré in exile in neighbouring Côte d’Ivoire, the status of his shareholding is debatable. We were told by more than one person that the workers hired for the relatively well-paid jobs in these mines had been hand-picked from among the political supporters of Compaoré. It would have been interesting to talk to them about the political situation, now that political support to Compaoré was no longer a condition of their employment.

Alongside the modern industrial mines, there has also been an expansion of the so-called ‘artisanal’ gold mining. We visited one of these mines near Bani in the central Sahel region. 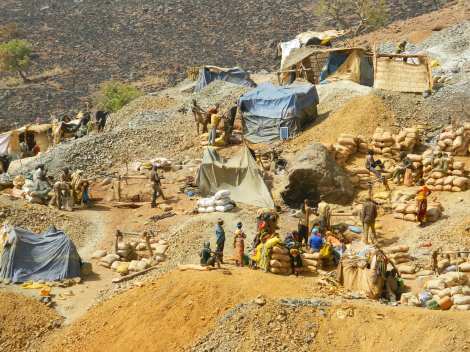 The scene was reminiscent of the final stages of the nineteenth-century gold rush in Central Otago in New Zealand, after the easiest alluvial gold had been exhausted and Chinese workers scraped out the last traces. 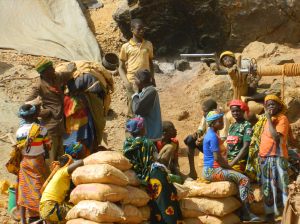 The sacks of rock are mostly carried from the mine to the extraction point by women workers. Photo: James Robb

The Burkinabè miners were living in the most basic imaginable shelters – a few sticks with a rough thatched or plastic sheeting roof, too low to stand up in, in most cases – and rough constructions and water-races for sluicing the ground rock and extracting the gold. 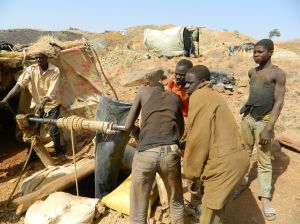 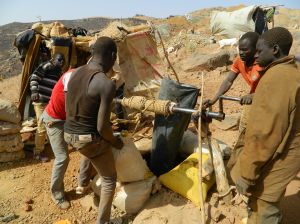 Unloading the sack of rock. The black polythene tube is the only ventilation in the mine. Photo: James Robb

But whereas the Waihi gold mine of a century ago in New Zealand had massive mechanical stamping batteries for pulverising the gold-bearing quartz, at this mining village we saw women breaking the largest rocks by hand, pounding them with a hammer. Even more incredible was the method of cutting these rocks from the hillside.

The gold-bearing quartz layers were mostly found on a steep hillside, several metres below the surface. Miners descended down holes about one or two metres in diameter, and hacked the rock away using hand tools. They then loaded the rock in sacks, which were hauled to the surface on a rope wound around an axle. Two winders working in tandem raised the sacks to the surface. A rough funnel made of black polythene directed fresh air down the hole – the only ventilation system in operation. It would be hard to imagine more difficult work or more unhealthy working conditions than these underground workers faced. 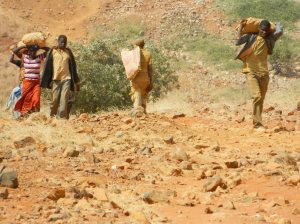 Carrying the sacks of rock down the hill to the mining village. Photo: James Robb

The sacks of rock then had to be carried (mostly by women carrying them on their heads) about a kilometre down the hill to the mining village on flatter land where the gold was extracted. The only machinery I saw was a few diesel-powered machines for grinding the small pieces into powder. Everything else in the process was done by hand. 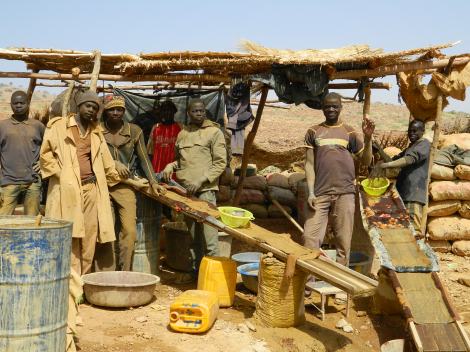 The mining village was a partly self-contained community, with shops and canteens and bars, all covered in thick layers of dust from the grinding operations. Young children played among the piles of waste, older children took part in the work. There were some slightly more substantial buildings in the village, but not many. 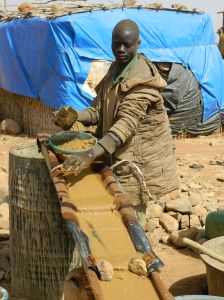 I was told that the miners were organised in groups of fifteen to twenty, each of which carried out the whole process from cutting to extraction. A boss employed the group, supplying them with food and shelter and paying them a basic wage, during the initial period of establishing the operation, before there was any gold produced. Once the gold produced by the group was sold, the proceeds of the sale were shared among the participants (after the boss took his portion). It was wage labour with a piece-work bonus. 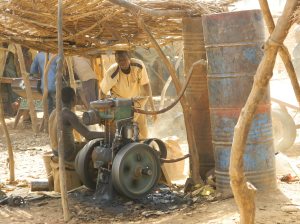 Small diesel-powered machines were used to grind the rock, but a large part of this work was done by hand. Photo: James Robb

These agricultural and mine workers saw little of the wealth generated by the development of these industries – even though not all of that wealth flowed into the coffers of the Canadian investors. There were parts of the capital, Ouagadougou, where the lavish modern constructions, both office blocks and apartments, would not have looked out of place in California.

Such industries are transforming the class structure of Burkina Faso nonetheless. Whereas at the time of the revolution led by Thomas Sankara in the 1980s, the modern proletariat in Burkina Faso was extremely small and almost entirely employed in small workshops and service industries, today that is clearly no longer the case. The working class is still a minority of the population – as it was in Russia at the time of the revolution nearly a century ago – but one which is destined to play a much larger role, as the toilers of Burkina enter the political arena once again.

Thomas Sankara said in his political orientation speech that laid down the course of the revolution in October 1983, “The Voltaic working class …[is] a genuinely revolutionary class. In the current revolution, it is a class that has everything to gain and nothing to lose. It has no means of production to lose, it has no piece of property to defend within the framework of the old neo-colonial society. To the contrary, it is convinced that the revolution is its own, because it will emerge from the revolution more numerous and stronger.”

The revolution was overthrown, but the working class has nonetheless emerged from it more numerous and stronger.

One response to “Agricultural workers and gold miners in Burkina Faso”