With a general election to be held in New Zealand on September 20, excitement is building in some quarters, nowhere more so than among supporters of the new Internet–Mana Party (IMP), an electoral alliance between the Mana Party and the new Internet Party of millionaire Kim Dotcom. The Internet-Mana Road Trip touring the country has been drawing some large audiences. (I have written about the background to the Internet-Mana alliance here).

Large turnouts at meetings for the Internet-Mana Road Trip

This week the IMP released a campaign video featuring footage of a rally for Kim Dotcom, the Internet Party founder and ‘visionary’ a few weeks back in Christchurch. More performance artist than political leader, Dotcom works the young crowd with the questions, “Are you ready for a revolution? Are you ready to take down the government?  Are you ready to extradite John Key?” The crowd chants in response “Fuck John Key.”

(John Key is the leader of the National Party and Prime Minister of New Zealand. The mention of extradition refers to the fact that Kim Dotcom is himself under threat of extradition to the US. Dotcom made his fortune through the file storage website Megaupload. Following a spectacular raid by dozens of armed police on his home in Auckland in 2012, Dotcom was indicted in the US on charges relating to violation of copyright laws. Political opponents of Dotcom, including Prime Minister Key, have hinted that his political initiative in founding the Internet Party is nothing but a ploy to evade extradition.)

Reactions and commentary on the video have been swirling around social media, with the video itself receiving tens of thousands of views.

Auckland University political marketing specialist Jennifer Lees-Marshment said in the New Zealand Herald that the video’s rhetoric about revolution and changing the Government looked effective, but “reminds me of propaganda, chanting-type campaigning more reminiscent of Hitler and fascism [in Nazi Germany] than New Zealand in the 21st century”.

Labour Party Member of Parliament Chris Hipkins tweeted that the rally represented “thuggery and megalomania intertwined.” Right-wing lobbyist and commentator Matthew Hooton went further, tweeting that the rally “feels a bit like a Munich beer hall in the 1920s.”

Laila Harre, a former union official and Member of Parliament who leads the Internet Party, defended the video and the ‘Fuck John Key’ chant. In an interview on Radio New Zealand, she said, “I celebrate the fact that [young people] are turning out, that they are being given an opportunity to express their voice. It is typical of the expressions that young people are making about the situation they find themselves in. This is a government that has reduced student allowances, that has reintroduced youth rates.” She tweeted that the chant was not unique to this IMP event, and that it has been frequently heard at music events for several years.

Other left commentators sprang to the defence of the video. “Are you ready for a revolution? – When was the last time anybody asked a crowd of young New Zealanders that question?” enthused political commentator and historian Chris Trotter. Likening the rally to the speeches of the first class-struggle socialists elected to the New Zealand parliament a hundred years ago, Trotter said, “Confronted with this government’s and this prime minister’s record, the essence of Peter Fraser’s and Harry Holland’s message would also have been: ‘Fuck John Key!’…The pool of voters may be expanding; bringing into play for the first time since 2005 the marginalised, the disillusioned, and – most alarmingly for the forces of the Right – the angry and aggrieved. The sort of people who need very little excuse to begin chanting – ‘Fuck John Key!’ ”

Gordon Campbell, columnist at Scoop, wrote, “Everyone knows young people – and some adults! – swear a lot. Especially, at times, about the deeds of politicians. If I was 20, out of work or facing a huge student debt, I might even find it liberating to join with a bunch of other like-situated people in expressing my feelings out loud. It might feel cathartic to do so. It might even help motivate me to get involved and vote.” 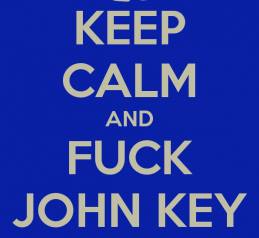 Others went further. Left-wing blogger Martyn Bradbury, who has decorated both his blog and his Facebook page with graphics which read, “Keep Calm and Fuck John Key,” turned on the critic Lees-Marshment: “All these two very, very, very, very old female academics have shown by describing a pretty normal night out at a gig as a nazi rally, is that the last time they were out past 9pm was maybe at a Christian Youth Rally sock hop in the early 1970s.”

The “Fuck John Key” campaign also took the form of the widespread defacing of National Party election billboards.  One defacement refers to the Internet-Mana policy of ‘no oil drilling’. Others have had the words ‘Casual fascists’ written over them, or liken John Key to Hitler in other ways. One modifies the National Party slogan “Working for New Zealand” to read “Working for China,” a reference to a controversy over moves by Chinese investors to buy farm land in New Zealand. 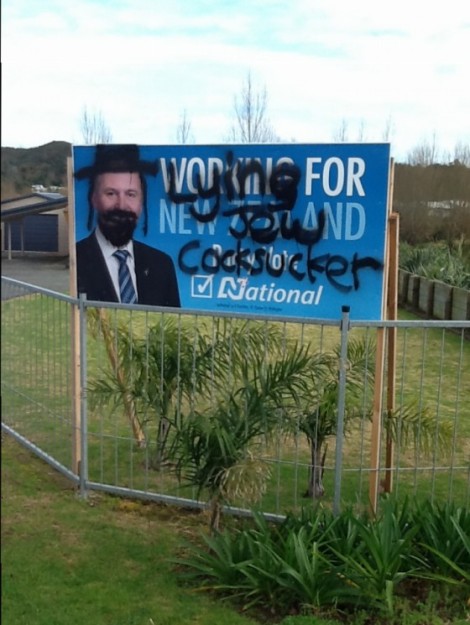 At least three have been defaced with anti-Semitic messages, one with a swastika and the word Jew written over the image of Key. (John Key is of Jewish ancestry). Another even more offensive defacement shows Key with the beard and payot side locks of an orthodox Jew, and the words “Lying Jew Cocksucker” painted over; yet another has “Working for New Zealand” changed to read “Working for Jew Zealand”.

Such acts of vandalism are clearly not just harmless little pranks. It is not known who carried out this abusive and reactionary vandalism, however it can be said without any doubt that they are all fully in accord with the slogan “Fuck John Key.”

The comparison of Kim Dotcom’s rally with Hitler’s Munich Beer hall putsch is inaccurate and ridiculous. The Hitler putsch of November 1923 was not just a bit of drunken rowdiness co-opted by a fascist demagogue, as it is sometimes portrayed. It was a serious attempt by ultranationalists to seize power by force, in a country in the throes of a revolutionary crisis, where the forces of revolution and counter-revolution faced each other down. Kim Dotcom is not a fascist, New Zealand is not in a revolutionary crisis, and this rally did not attempt to seize power. There was no thuggery involved, nor any megalomania.

And yet, the ‘left’ defences of this video completely miss the point. A crowd of frustrated and angry young people chanting “Fuck John Key” may be nothing new – I accept Internet-Mana’s claims about that – but for a political party to promote this as their political campaign advertisement is a further big step towards the coarsening of political discourse. Anyone who is searching for an independent political path for the working class should avoid taking this step into the bourgeois swamp.

So widespread is the political disorientation on these matters, it seems necessary to state some things that ought to be rather obvious: The word ‘fuck’ is a common slang word for the sex act – so common, in fact, it can hardly be considered offensive when it is used in that sense alone. However, the word also carries another connotation, meaning to ‘do someone over’ or abuse them, violently or sexually or both, often in vengeance. It should not be difficult to see that the great popularity of this word, with its twin meanings, indirectly reflects the tacit acceptance of sexual violence in capitalist society. Do the people who defend the ‘Fuck John Key’ slogan really endorse making the language of sexual violence an accepted part of political discourse?  It appears so.

If Laila Harre thinks that using and legitimising such language is a way to ‘connect with youth,’ she must have a very low opinion of the political capacities of young people. When young people do connect with real political struggles, they will have less tolerance for the language of sexual violence than the older generation, not more.

The Struggle for Cultured Speech, an essay in Problems of Everyday Life, by Leon Trotsky. Available from Pathfinder Press

I was reminded of an article written by the Bolshevik leader Leon Trotsky in 1923, coincidentally the same year as Hitler’s Munich beer-hall putsch. In that year, the fight for the soul of the Russian revolution began in earnest. Lenin was incapacitated by a stroke. The New Economic Policy had brought some relief from the famines of the civil war, but at the cost of strengthening capitalist layers among the peasants. Revolutionary opportunities in Germany had been squandered, for the second time in five years, condemning the Russian revolution to a prolonged period of isolation. Surrounded by these immense problems, Trotsky still took time to discuss the question of swearing, in an article entitled “The struggle for cultured speech.” Clearly, the Bolshevik leader did not consider this a trivial question.

Trotsky noted that the workers at a shoe factory had adopted a policy against swearing. He supported this initiative, and urged its adoption by wider layers.

“Abusive language and swearing are a legacy of slavery, humiliation, and disrespect for human dignity – one’s own, and that of other people,” Trotsky wrote. “Russian swearing in ‘the lower depths’ was the result of despair, embitterment and, above all, slavery without hope, without escape. The swearing of the upper classes, on the other hand, the swearing that came out of the throats of the gentry, the authorities, was the outcome of class rule, slaveowners’ pride, unshakable power. … Two streams of Russian abuse, that of the masters, the officials, the police, replete and fatty, and the other, the hungry, desperate, tormented swearing of the masses – have covered the whole of Russian life with despicable patterns of abusive terms. Such was the legacy the revolution received among others from the past.”

Trotsky comments, “There is no denying that the old pre-revolutionary forms of language are still in use at the present time, six years after October [the 1917 revolution] and are quite the fashion at the “top”. When away from town, particularly from Moscow, our dignitaries consider it in a way their duty to use strong language. They evidently think it a means of getting into closer contact with the peasantry.”

Later in the article he notes, “Language is the instrument of thought. Precision and correctness of speech are indispensable conditions of correct and precise thinking.”

For those engaged in building electoral support for Internet-Mana, the great attraction of the ‘Fuck John Key’ slogan is its broad appeal. It can draw in anyone who has a grievance against the government, from students suffering high student debts, to workers caught between rising prices and stagnant wages, to xenophobic nationalists who fear Chinese investment, and even Jew-haters. They may be a mixed bag, but their votes all count.

This is the very same reason why this slogan is an obstacle for workers and young people who are seeking a way out of the capitalist morass. To gather all the aggrieved under the banner of what they are against is easy. But real politics begins with what you are for. Unless you are clearly for organising and mobilising the power of the working class and its allies, the justified anger and disillusionment of young people can just as easily be turned in a rightist, anti-working class direction. The anti-Semitic vandalism should be taken as a sharp warning of this danger.

What Internet-Mana is for, above all else, what they advise all those young people to do is, as Kim Dotcom explains in the video, “to get out and vote.” That is to say, they take “the marginalised, the disillusioned, the angry and aggrieved” – and channel their frustration right back into the parliamentary trap which is at the root of their political frustrations in the first place. This does not, as Chris Trotter would have us believe, alarm the ruling class in the least. It is precisely what they seek to do in every election.